Team Proc Score kicked off the fall season’s intramural soccer coed competitive league with a resounding 6-1 win over Angel’s Emeralds (whatever those are) on Friday. Ditching the business casual standard, the team sported their freshly printed mint green jerseys designed by the team’s very own Anne Marie Strickland. On the front is the procedure that we have in mind all season: Score. Behind a brace (two goals) each by Layton Barker and TJ Beaulieu, the IAA proved that we’re far more than a bunch of exhausted grad students. 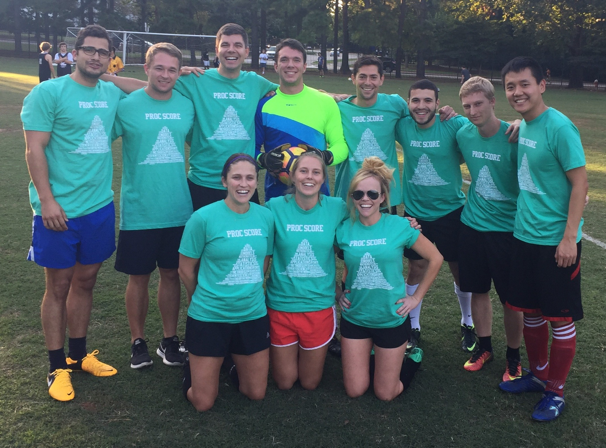 Kimmy Davis, Florian Singhoff, and Alex Christian anchored the defense, but not without letting Sam Ballerini – a former catcher a Tufts University – come up several big saves between the pipes as the starting goalkeeper. Carrie Field and Strickland put in a full 50 minutes of strong midfield play. Super subs Daniel Li and Adam Crouch appeared for Proc Score in attacking roles. It was an all around dominant performance by the team as they set their sights on the playoffs in October.
Next week Proc Score faces off against toga-wearing, keg-standing, pastels-and-boat-shoes Kappa Delta in their second match of the season.
Columnist: TJ Beaulieu